In north, bidding gets passed back to you. Do you call or pass?

This is what I would refer to as a championship call. 2 low trump + an off ace is a must call imo when you don't block any other suits (I would even call with a doubleton Next off ace when up 8-2). The cost of passing will now be high enough to make calling worth the gamble. IOW, making this marginal call will probably have a negative expected outcome, but passing when you block nothing probably has a higher negative expected outcome. In euchre offense is the best defense. Make this marginal call. Don't give S1 chance to go alone should he have it. This is especially critical up 8-2. The dealer made a great play, a play that 99% of the player base won't make becuz 99% don't play the situation, they just play their 5 cards.
Top

This is a classic wes dealer donate. Which happens to make point. I've used to never donate like this before, but I like the merits of controling the game by doing this. Something Ive started to do ever since I met Wes. However, Im sure I dont do it nearly as much as Wes does.

Tbolt65 wrote: ↑
Tue Dec 08, 2020 5:20 pm
This is a classic wes dealer donate. Which happens to make point. I've used to never donate like this before, but I like the merits of controling the game by doing this. Something Ive started to do ever since I met Wes. However, Im sure I dont do it nearly as much as Wes does.

If you wanna see a real championship dealer donate check out this hand: 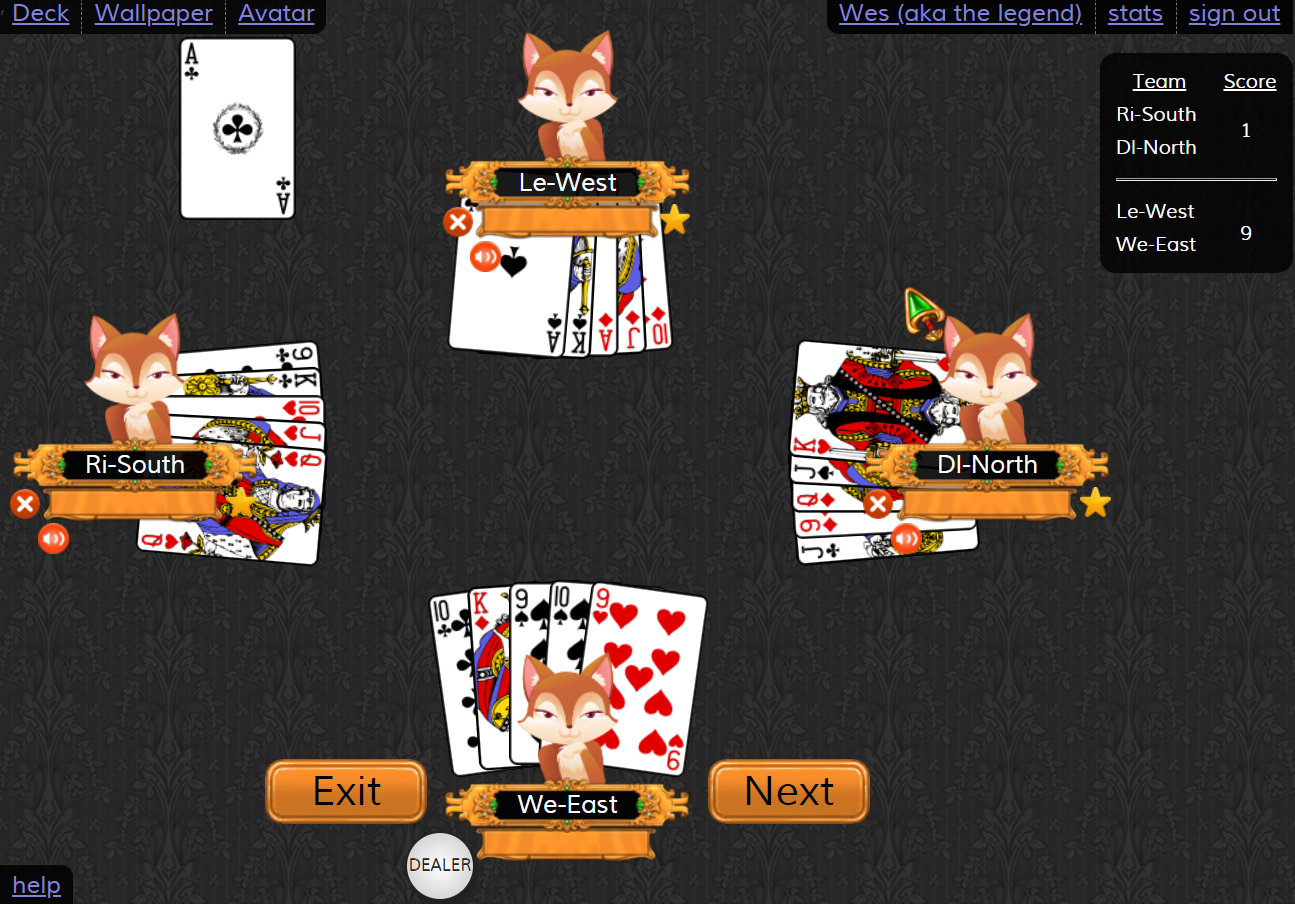 If one were writing a euchre book and wanted a page or two on dealer donates it would be hard to find a better example than this. Here the dealer blocks no 2nd round suits, his team has a big lead up 9-1, and the dealer is clearly donating with just 2 trump and nothing else. And look at the beautiful S1 4 point loner this dealer donate stopped!
Top

I’m ordering at all scores, unless opponents have 8 points.

A positive EV, agreeing with Wes.

This is not a classic “donation.” However, notice that it does block a R2S1 heart loner, which would have been my R2S1 decision, if I was down 4 or more points.

There is “donation-like” benefits to ordering these marginal hands. If your hand is marginal, there is a higher probability that opponents have a loner hand. I suggest that the probability has increased from a 10% probability that opponents have a loner-order, by 50%, to a 15% probability. The EV adjustment could be as much as 5%x4=.20. Even if you factor getting 4 points at a 30% probability, that is still 30%x.2=.06. So IMO, the EV is 0.19 to 0.33. I don’t calculate that at the table, it simply suggests, as OE lessons state, “Euchre favors the aggressive player.” Tbolt reminds us though, “but not too aggressive.” I submit that ordering this hand meets those criteria.

A more fundamental guideline would be, if you have a marginal order, (especially R1S4 or R2S1), with no defensive strength, order.