Did S1 play this hand correctly

Did S1 play this hand correctly 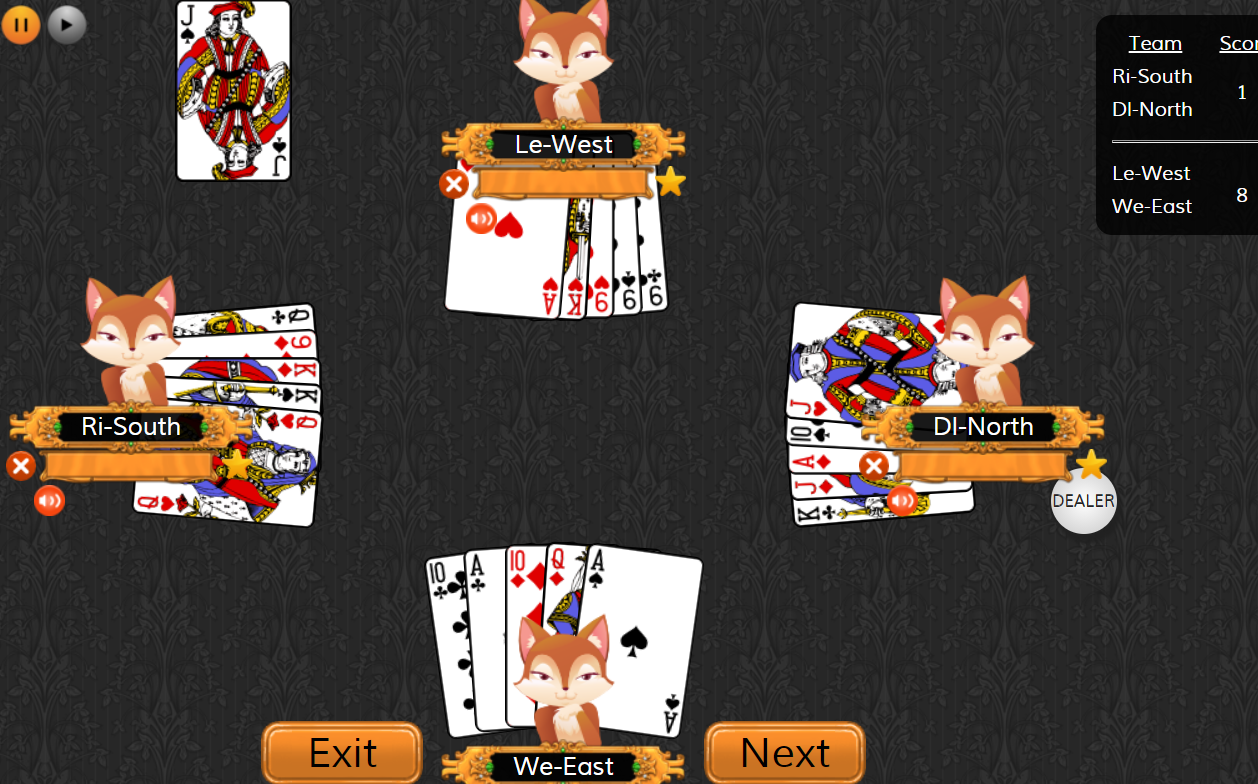 Double leading definitely worked! Leading a fresh suit, a diamond, seems more natural. But knowing, that S1 was donating, and had a very weak hand, probably makes the double lead a better play, even in general.

S2’s R2 play against the double lead now has to be questioned. He knows that his partner, S4 has the Right. He only has the single trump and can’t lead to partner’s Right (assuming, with strong probability, S4 has at least 2 trump). Should S2 throw off?

We can also add that S2 knows S1 donates in this situation. Does that make it even more important for S2 to throw off against this “strange” double lead?
Top

On donates I do lead aces, generally red aces and usually three of that suit to the ace if it's not red. I like to get my partner to short suit themselves by throwing off. Thats when I have no trump.

If I have a low trump with an off ace or no aces I lead trump.


However when I donate and I have a high single trump. I like to try to get my partner to trump in right away or lead to a possible ace. So I can get the lead to my partner. In this hand Im leading 10 of diamonds.

I always try for 1 point when donating. It generally helps out when your partner in 3rd seat realises your donating. Otherwise they may play it like you are calling.

When I donate I tend to play the hand as if the dealer was the maker. And there's two reasons I double lead offuit from S1 vs the maker-dealer:

2) When I have a high trump, the Ace or the Left, and I'm hoping S3, my P, will trump high enough to force out the Right and promote my high trump to boss status.

Number 2 is the reason I double led in this case. Notice after my Ac lead, all the clubs are accounted for. The only club left is in my hand. Knowing the dealer is out of clubs I would usually NOT double lead here as I am surely putting S3, my P, in a spot to get one of his trump squeezed off. However becuz I have that high trump (As) I'm hoping my P does get squeezed off of a trump provided he trumps high enough to force out the Right. This also can create a situation where the maker--trying to be conservative and eke out a point--will hold back his Right after my P trumps high giving our team another trick. A play that can easily lead to a euchre becuz now the maker is in a semi-squeeze spot and the Ace of trump is behind the maker.


Richardb02 wrote: ↑
Sun Dec 06, 2020 3:56 pm
S2’s R2 play against the double lead now has to be questioned. He knows that his partner, S4 has the Right. He only has the single trump and can’t lead to partner’s Right (assuming, with strong probability, S4 has at least 2 trump). Should S2 throw off?

If I'm S2 I'm trumping in on the double lead. S2's Ks could easily be wasted anyways if trump is led soon, so might as well try to make some use out of it. Worth noting, after S2 trumps in with the Ks his diamond lead is incorrect. In that spot S2 should be leading to his P's void. His P, the dealer just showed a diamond and we already saw he had a club, so hearts has to be his void. Therefore S2 must lead a heart. It turns out this mistake didn't actually cost S2's team but it could have.
Top

Tbolt65 wrote: ↑
Sun Dec 06, 2020 5:39 pm
On donates I do lead aces, generally red aces and usually three of that suit to the ace if it's not red. I like to get my partner to short suit themselves by throwing off. Thats when I have no trump.

I like the idea of leading an off Ace is this spot becuz of the information it conveys. By leading an off ace you are letting your P know right away that you are donating, and that information can help your P play his hand more optimally. Plus those times your P has a decent hand, leading an off ace will make him less likely to get squeezed off of a trump on the first lead, and as you said this lead also gives your P a chance to short suit themselves.

I agree but it depends. If I have a void, and say the Ts but I'm donating vs a 9s upcard, then I will NOT lead trump. The idea is that I now know that the Ts can still overtrump the dealer those times the dealer gets caught in a squeeze. Other than that, with a low trump and thus a low chance of overtrumping the dealer should he get caught in a squeeze, I will lead trump. Based on the same logic, I am always leading trump if I have no voids.

I think it's impossible to prove which lead is better between the Ac and the Td until we run that mythical simulation. I favor the Ac for reasons already stated. Another reason I favor the Ac lead is becuz this is what we would lead if our P called in 3rd and we had no trump given that this lead usually prevents our P from getting squeezed off of a trump on the first lead and it allows him to possibly short suit himself. Given that the Ac is the best offsuit lead when our P actually has a hand and this lead has the informational advantage of letting our P know right away we are donating thus giving him the chance to adjust his play accordingly, I can't help but believe this lead is superior to the Td lead. But again who knows. I also like the Ac lead in this spot whenever I have a high trump (Ace/Left) becuz if that Ac walks I have the option of double leading the club hoping 3rd seat can trump high enough to force out the Right and possibly promote my high trump to boss status.

The reason I posted this hand is becuz this website recommends always leading trump when donating. And in the past that's what I always did, but after studying/watching your play and Irishwolf's play (both you guys do not always lead trump) it made me question this strategy. In any game when strong players disagree on a particular line and we don't have the math/simulations to settle matters, one has to accept the reality that we can't really be confident which line is best. Another deduction one can make is when strong players disagree on which line is best, the EV difference in each line will most likely be minimal. That said, after watching your play and Irishwolf's and figuring out what you guys are up to, I do highly suspect that the recommendation of this site is not strictly correct. I would refine it this way (referring to all donations):

1) If one has a high trump + a void, don't lead trump. High trump here is defined as the Ace or Left, but I think I would run this play with the K or Q too.

2) If one has a low trump that's higher than the upcard + a void, don't lead trump

3) If one has a low trump--defined as a T/9?--that's lower than the upcard, lead trump whether you have a void or not. What to do if we have a Q is the debatable part for me.

4) If one has no voids always lead trump.

In the actual hand, my team made the point. Fittingly the winning trick was when my Ace of trump overtrumped the dealer. After the hand the dealer said something like "that never should've happened", and it probably never would've if I hadn't studied your and Irishwolf's game.
Top
Post Reply
5 posts • Page 1 of 1