Introduction to the rules of Euchre

Euchre is thought to have evolved from an old German game called "Juckerspiel", and then brought to America by immigrants in the early 19th century. While still widely popular, it was considered to be the national card game.

Euchre is a trick taking card game for 4 player in two partnerships with variations for two and three people. Euchre uses a standard deck of 24 playing cards (the 2's through 8's are removed). The objective of Euchre is for a team to score 10 points. Before game play can begin, one must have an understanding of the rules. The rules below were designed for tournament play, but work equally well in social settings.

The Dealing of cards

To determine the first deal of the game, cards are dealt face up until a player receives any Jack. That player becomes the dealer. Subsequently, the deal rotates clockwise each hand.
Cards must be properly shuffled. The deck is then offered for a "cut" to the player seated to the right of the dealer. A cut card is provided and must be used to cover the bottom card of the deck during dealing.

Cards may be dealt in groups of 2's and 3's, or 1 at a time. It is always the dealer's choice as to the preference of deal style; however, that person's deal style must be maintained during the entire round.

The naming of trump

Once the 21st card has been turned up, the deal is considered finished, and naming of trump may commence.

Starting with the player to the left of the dealer (Eldest hand), each player in turn has the option to name trump. If passed, the option passes to next player (clockwise rotation). The only language which is allowed during the 1st round is: "Pass", "Pick it up", or "Alone". The bidder may not use descriptive phrases that give clues such as "Let's try clubs", "I think I can", and so on. A warning is given for the first offense. For subsequent offenses, the offending team loses its right to bid and the opposing team awarded two points. Only one exception, the dealer may simply pick up the card to indicate they declare that suit as trump, or simply turn over the card to indicate they pass, with no verbal comment.

If all players pass, the up card is turned face down in the kitty and a second round of bidding commences. In this second bidding round the bidder must state their intentions by saying the name of the trump suit (the turned down suit cannot be called).

If in the second round of bidding the first three players pass, the dealer is obligated to declare trump from the remaining 3 suits (aka "Stick the Dealer"). This speeds up game play.

Once trump is declared, the dealer places the trump cube (see definition below) on top of the kitty, showing the declared trump suit. No player is subsequently allowed to ask which suit is trump.

Any player declaring a Loner must clearly state this intention by saying "Alone". They may not use phrases such as "I'm trying it," "Sit this one out, partner," "It's all mine," etc. When a player declares a Loner, his/her partner must drop their hand face down on the table, in the middle position (not to their left or right side). The partner is not allowed to look at the kitty during a lone attempt.

"Defending against loners" are NOT allowed in a euchre tournament.

Cards are not to be tossed into the middle of the table. Instead, each player makes their play by placing a card in front of them on the table (forming a "square"). At the end of the hand, each player pushes their card to the winner of each trick. The person winning the trick neatly puts it face down in their area. The person that takes the trick must retrieve the trick and store it in front of them, keeping each trick separate. Do not push a trick you have taken to your partner for storage so the tricks will be all together; each player must rake in their own trick. This is done to enable the tournament director to prove a renege. (The trick in front of you will be evidence as to what suit you trumped).

If a team member bids alone, his partner may retrieve the tricks.

"Tramming" is not allowed. All cards must be played completely out.

A card laid is a card played

* If the bidding team takes all 5 tricks in a hand they score 2 points.

* If a team member goes alone and takes 3 or 4 tricks, that team scores 1 point.

* If a team member goes alone and takes all 5 tricks, that team scores 4 points

* In a standard progressive event, on a lone call, the person making the call scores 5 points and his partner scores 4 points.
A total of 8 hands are played, with everyone dealing twice.

* The first team reaching a score of 10 points wins the round (game). A total of 13 points per game is possible.

DO NOT make your own Rulings! Please call the Tournament Director (TD)

If a renege is alleged but ultimately not proven, the team falsely accused by their opponent's scores 2 points.

BID OUT OF TURN: - All play stops for that hand and the non-offending team scores two points.

The non-offending team may void the out of turn bid and be allowed to call alone (the offending team will score no penalty points), but do so at their own risk as standard scoring will apply.

LEAD OUT OF TURN: - All play stops for that hand and the non-offending team scores two points (four points if on a lone call).

While not allowed in most tournaments, defending a lone is an interesting variation to the standard set of rules that can add an exciting twist to the game:
If a player calls alone, another player can declare that they want to defend or challenge the lone call. In this case, the two play against each other while their partners sit out. If the player calling the lone takes three or more tricks, their team gets 4 points. If they don't take at least 3 tricks then the opposing team gets 4 points. Only players that bid after the lone caller are eligible to defend alone; any player that has already passed is not.

Relaxed social rules may include;

Natural Trump: - This rule states that you must hold the suit of the turned card in your hand in order to pick it up, or order into the dealer's hand.

Farmers Hand Ver 1: - A 'farmer's hand' is a hand that contains all 9's and 10's. It is also known as 'No Ace No Face'. If anyone gets these cards, the hand is void and re-dealt by the same dealer.

Farmers Hand Ver 2: - There is second variation that states a re-deal is only allowed if, after trump has been named, a hand contains all 9's and 10's and no trump.

Going Under - AKA Playing bottoms: - Going under is sometimes called playing the kitty, playing bottoms or playing under the table. While the rule varies slightly from place to place, it allows for someone that holds a 'farmers hand' (see above) to swap any three cards from their hand with the three bottom cards that are left in the kitty.


Irregularities not covered above

The following list covers those rare situations that may come up in a euchre game, Although not covered in the standard rule set, these unwritten rules should be followed.

* If the cards are dealt by the wrong player and discovered after the first trick is played, the deal stands.

* Once the up card is turned, the deal is considered complete, and naming of trump may begin.

* If first seat leads a card before dealer discards, the card must remain in play for that hand and cannot be retrieved. It also no longer has any value and the hand cannot be won by first seat. The first lead passes to second seat.

* If 1st seat leads a card before dealer discards, the card must remain in play. It cannot be retrieved. It no longer has any value. The first lead now goes to the second seat

* Dealer must be giving reasonable time to discard, but cannot be reminded to do so.

* If the dealer fails to discard, the opposition scores 2 points (or 4 points if lone hand was called by opposition).The deal is passed to the next player.

* If a player declares alone and their partner plays a card, the lone call is canceled and the hand is played as normal hand.

* If a renege is alleged, any team member has the right to look back at any previously played hand. He must, however, wait until the hand in play is complete.

* If during a trick, two different players renege, the penalty is against the first renege and the second renege is canceled.

* A point must be marked before the end of the next hand. Once the next point is made, any prior points made, but not marked up, are forfeited.

* If in the second round of bidding someone tries to name the turned down suit as trump, their team forfeits the right to bid on that hand.

* If a card falls out of a hand face-up, the card is left on the table and must be played at the first legal opportunity. The card has no value and cannot take a trick. If the offending player has the next lead, they must lead that card, others must follow suit if possible.

* When playing a card, if the card has been extended far enough that any other player can see its face, then the card is considered played. It cannot be placed back in hand.

* Once a trick is complete, the cards must be turned face down, and no one may look at them until the end of the round (except when a renege is alleged).

The image below shows a perfect lone call in hearts prior to the dealer picking the jack. 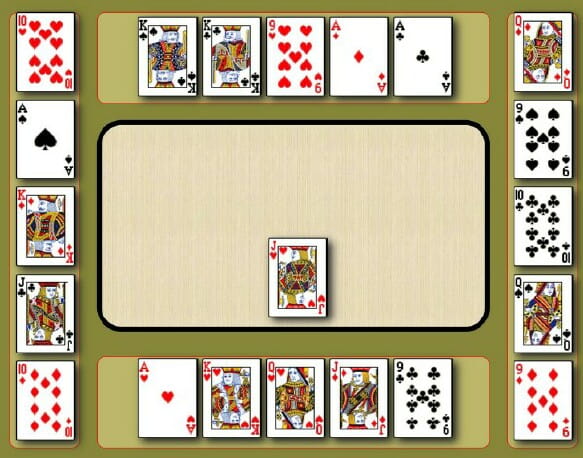 Just learning the game?
Get started with our euchre lessons

Looking to hold a euchre tournament
We show the different options