Learn how to Play Euchre - Lesson 9
The End Play

All good things must come to an end

The term End-play is borrowed from the game of Bridge. While being one of the most powerful plays in euchre, for many euchre players the tactic does involve a change in their basic strategy.

For an end-play to be successful, players must be able to think a couple of moves ahead. After taking a trick, the maker plays a low card hoping to pass the lead to his left-hand opponent. At the same time, they retain possession of the boss plus a second trump. This will give them the last play on the next trick.

Perhaps the best way to explain an end-play is with an example: 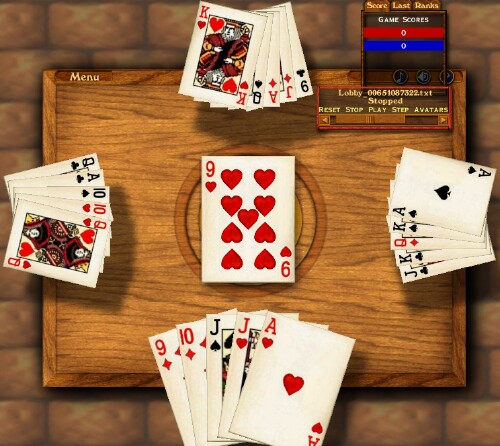 In this hand, we have the dealer sitting in South position. Upon completing the deal, a 9 of hearts is turned up. No one is tempted by the 9 and bidding gets passed back. The dealer, already holding two hearts, picks the 9. After discard, he is holding a three trump two-suited hand. Readers of this site know these are biddable hands. However, the low off-suit cards in next are a concern.

West starts the hand with an ace of clubs lead. North follows suit with the 9 and East with the jack. This leads into the dealer/makers void and allows him to trump with the 9.

The maker's team now has their first trick while still holding right - ace. This is a powerful combination and usually good for two tricks. If the maker could put himself in a position of having last play, that would assure a point. This would require the first seat having the lead.

The maker leads the 9 of diamonds. Someone has to take this. The maker is hoping it will be the player in first seat.

The ploy works as planned. First seat trumps in. Now, no matter what cards are against him, he has his point.

Please note that many successful teams use this technique.

Winning at euchre involves the right combination of taking risks, skill, and a little luck. The end-play puts just one more tool in your euchre bag of tricks.