"Taking euchre to the next level"

Here's another hand where one has to think about holding a jack that could be a left. Once again, the dealer sits in West. He picks up the king of clubs giving him a three trump, two-suited hand. He then discards queen of hearts.

North starts things off by leading the ace of spades, West follows suit and South throws off jack of diamonds The maker(W) takes the trick with the 9 of clubs (trump).

Now the maker(W) correctly leads the 9 of diamonds. Leading trump under these circumstances would be a disaster. Just too many cards out that could be out against you. North and East follow suit. I(S) take the trick with the ace.

At this point, both teams have one trick each. I have the lead. Because I hold the right, my teams second trick is secure, but our team still needs the last trick for a euchre. I lead the ace of hearts. The maker(W) now has a couple of different cards he could play, but nothing is going to help. They were set. Euchre is a game of calculated risks and if you want to win, you must take chances. Unfortunately, for them things don't always go as planned.

The dealer is in the East position. They have just turned up the jack of spades. I'm in South and am hoping the dealer will pick the jack, I pass. If picked this could be a possible euchre for their team and 2 points for us. 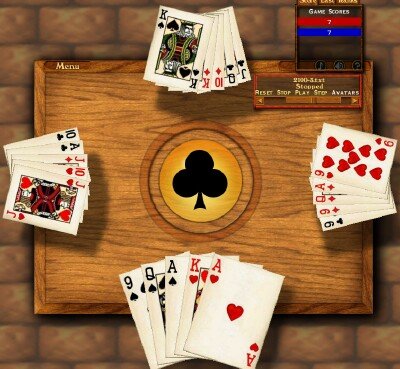 West and North also pass. What do I do now? With the cards I hold, there is a strong possibility of a lone somewhere, it could be in one of my opponents hands. With two off-suit aces, this is a good time to try a no-trump next call.

I start by leading the ace of hearts. West plays the 10, my partner(N) shows void and throws off the king of spades. East uses their 9. Our team has its first trick.

Because my partner(N) showed void in hearts, I lead the king of hearts. This may draw out trump or give my partner a chance to take the trick. West follows suit with the jack. My partner throws off a 10 of diamonds. I think to myself, this isn't looking good. East takes the trick with the 9 of clubs.

I skipped showing a hand, but in that hand East made their ace of diamonds good. This gave them their second trick.

East then leads the queen of diamonds. I play the king of spade, West plays the ace of clubs. My partner(N), is wondering if I called with just the left and over trumps with the right. This time the left is buried and that leaves him with the top trump. Willingness to a chance and a little luck adds another point to our score.

The dealer sits in the East position. They have turned up the 10 of diamonds. North passes and West, holding both bowers, orders their partner to pick up the 10.

I hold three aces and know that pulling a round of trump will increase my aces chance of surviving. I lead a trump, the king. The maker(W) plays the left. My partner(N) follows suit with the 9 and East plays the 10 of diamonds, the card they had just picked up.

It's worthwhile to note here that on hands where a partner orders a card into the dealer's hand, a trump lead could set them up for a euchre. (The idea behind this is that the dealer may only have the one trump they picked up).

Now the maker(W) leads the king of hearts, North follows suit with the 9, East throws off the jack of clubs, and I take the trick with the ace of hearts

Now I start to wonder if my ace of diamonds may be boss? Only one way to find out, lead the ace.

No, the maker(W) still had the right, but lady luck can be fickle and he choose the wrong suit to lead back.

These games are euchre at its finest. Very competitive games played by great euchre players. We did win this last game and everyone had an enjoyable evening. I'm looking forward to the next we meet up.

By now you should have some idea of how euchre is played at advanced levels. Yes, as shown above, it takes paying attention to details, a lot of determination, and the drive to outperform the opposing team. Still, there's no real magic to playing at this level, anyone can do it. Practice every chance you get, be observant of how others play, take chances and don't be afraid to try new plays.

With this page, I end these euchre lessons. In these past lessons, I have talked about the many tactics experienced euchre players use to win. I have provided the tools you need to gain a competitive advantage over any rivals. The rest is up to you. Many mediocre players never step outside of what they know to be a safe play. The truly great players are those that have developed good decision-making skills. They are not afraid to think outside of the box and are willing to take risks. They make 'lucky' decisions by listening to their intuition. Using these skills, they just seem to know what cards are where and how to make the best out of every hand. Much of this comes from experience along with the willingness to try different plays. These players tend to be the problem solvers of the world. They strive to be the best they can. When they are euchred on a hand, they consider this as an opportunity to learn new ways to stop it from happening again.