It's always fun to euchre the maker

Going for an Euchre

It is typically not very easy to euchre the maker, but that doesn't mean you shouldn't try. Look at the following example:

The dealer sits in the West position and picks up the queen of hearts. North seat starts the hand by leading the jack of spades. 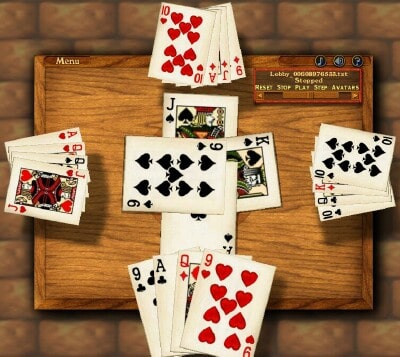 East plays the king of spades. South uses their ace to take the trick. The maker(W) must follow suit and plays his 9. His opponents have taken the first trick.

South now leads the ace of clubs. The maker(W) trumps in with the queen.

If you were sitting in North, what card would you play now?

Would you overtrump trump the queen? Holding the left - 10 already assures you of a second trick. Ask yourself; is there any way to achieve a euchre? Your team has one trick and you hold a second one in your hand. You have a perfect opportunity to rid your hand of an unneeded card, the 9 of diamonds. If your partner can get a trick, it's euchre time.
Both teams have one trick.

After taking that trick, the maker(W) leads his queen of spades. North is now thinking the maker could be trying to set the hand up for an endplay. North knows that the best way to avoid helping the maker is not being in the lead. This leaves him with only one good choice; throw off the ace of diamonds. This may be the correct play for another reason. His partner had taken the first trick with the ace of spades, yet didn't try a spade lead-though. That could be an indication that he was void in spades. 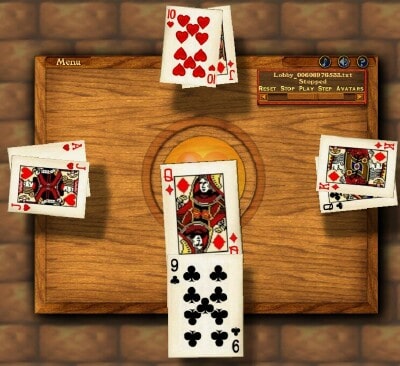 Sometimes things work out exactly as planned and by North giving up the ace, it paved the way for South to take a trick with the 9. Now, no matter what happens, the E/W team is euchred.

Sometimes you need a 'plan b'


Experienced players like to try as many lone calls as possible. Some of these may be very risky; however, the reward of 4 points is oh so tempting!

Take a look at the hand below, the dealer is in the South position.

The bidding gets passed around, the dealer picks up the 9 of spades and calls alone.

East starts the hand with an initial lead of the 10 of hearts. East trumps in with the ace. This was the last thing the maker wanted to see.

What should you do next?

Overtrumping with the right is often an invitation for a euchre. The first thing you need to do is give up on trying to make your lone call. It is highly unlikely that will happen. Instead, it's time for a 'plan b'. With a little luck, you still should be able to salvage a point. Because queen of diamonds can't help much, this would be a good chance to rid your hand of it.
Your opponents have taken the first trick.

Now East, seeing that the maker just threw off a diamond, leads back the 9 of diamonds. The maker(S) takes the trick with the ace. That gives him one trick.

Next, the maker leads the right. Everyone follows suit and that gives him a second trick.

The maker still needs one last trick. There may be more trump out against him. When you're not that strong in trump, the best way to draw out any possible trump is by using an off-suit ace. The maker leads the ace of clubs. As it turned out the ace was good.

If you go back and look at the complete hand, you'll see that even if they had taken their partner along it was likely only a one point hand. It's normally the same with most unsuccessful lone attempts. Why not go for the lone and the four points it may bring.