"luck is what happens when preparation meets opportunity"

On these last five lessons, I will show you some examples of euchre played at a completive level. All of these are snapshots of actual games played on-line. As you read through the following pages, ask yourself 'would I have taken that risk?', 'how would I have played that?' The one common thread among all of these plays is that the players involved are willing to take the risks necessary to win. They also have trust in their partner's ability to do their part. Some of these are games I played in, others I just watched.

In the following example, we break one of the primary rules of euchre. Never trump your partners Ace. While this is a standard guideline, there will be times when it may not be the best possible play. Do not be afraid to step outside the box and try a different approach. Winning at euchre is about taking chances.

Here is one such example: 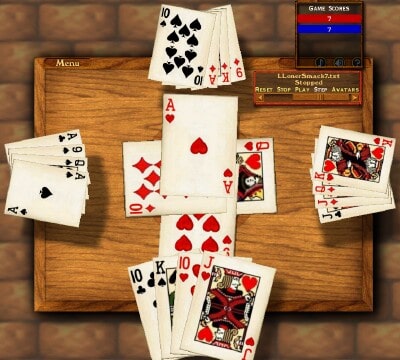 The dealer sits in the North position. In the first round of bidding everyone passes. In the second round, East seat bids hearts and leads the queen. This lead shows that East seat is fishing for the top trump. South has the right, but this is the place to play second-hand low. Basically, 'Let's see if my partner, the dealer(N), can take this trick'. West seat shows void in trump. North comes through and takes the trick with the ace. 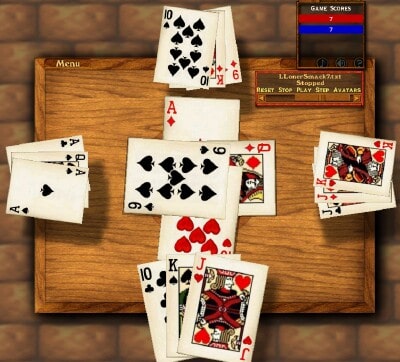 Now North leads back the ace of diamonds. The maker(E) has to follow suit and plays the queen. Knowing that West showed no trump on the last trick, South trumps in with the 10. That is trick two for the N/S team, leading the right completes the euchre.

Stepping outside the box

In this next hand the dealer sits in the South position. Their partner(N), holds three hearts and orders the 9 into their hand.

Now East leads back the Queen of trump. Because East holds two aces, they are hoping to make them both good by removing a round of trump. West takes the trick with the right. There are now five trump played.

West leads back the king of clubs. The maker(N) trumps in with the king. East follows suit with the 9 and South throws off the 10 of diamonds. The maker's(N) team has one trick and the E/W team has two. The maker will need the next two tricks to complete the hand. Six trump are now gone.

Now the maker(N)knows he holds the last trump. Diamonds have yet to be led. By leading the trump ace, he is hoping to see the diamond ace fall. However, East seat, remembering that the maker(N) trumped a Club earlier in the hand, holds on to the diamond and discards the ace of clubs. By paying attention to the cards played, the E/W team gained two points from the euchre.

When playing euchre, remember this is a game of probabilities and a willingness to take chances. Bids and plays are made with the expectation that, more often than not, they will work to your advantage. Of course, this also means that sometimes they will not. A good partner knows and understands this.