Hold Your Own Euchre Tournament - 1

Choosing the correct format for your event 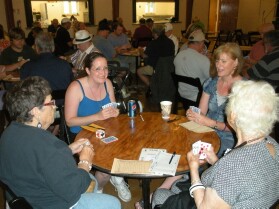 Although it does involve some work, holding your own euchre tournament can be a lot of fun. It's also a great way to meet new people. In this section, I'll cover the different types of tournaments along with what is required to make them a success.

Here is a tip from Ohio Euchre; Standard Pinochle deck may be split in half to make 2 full Euchre decks.

When considering holding a euchre tourney the first decision would be to pick which format is right for you. All tournaments fall into two general categories, progressive and partners. Each style has its own advantages and disadvantages. While all euchre games are played as partners, the two differ in respect to the method of keeping score along with the way people advance from one table to the next. In the progressive model, teams change partners after each game. This format tends to lend itself to people looking for the social aspects of the game. Tournaments that follow the partner's model tend to be more completive. Both types use standard euchre rules. No matter which one you choose, you will need the proper scoresheets. We supply all the necessary paperwork to help run your event. These are downloadable and provided by OhioEuchre as a public service.

Below is a brief description of the different style tournaments. Each type covered further on a separate page, accessible by using the links below

The Progressive format is used by many social and fund-raiser events. It is also known as the 'Round Robin format and can be played as part of a completive tournament. The format differs from standard partners in that teams play a total of 8 hands per game. At the end of each game, teams changes partners. By alternating partners, it provides an opportunity to make new friends, and reunite with old pals. Tournament winners are decided by the total number of points won at the end of the event.

Click Here to learn more about the Progressive Format

The Grand Prix format was developed for use in the World Series of Euchre. It is now used in most major Euchre tournaments across the U.S and Canada. With this method, partnerships remain together the entire tournament. Everyone gets to play the same number of games. Once a round is complete, one team moves on to the next table. There are built-in provisions to handle an uneven number of teams. The tournaments tend to move along quickly as there is normally very little waiting between games. Tournament winners are decided by the total number of games won, with points being the tiebreaker.

Click Here to learn more about the Grand Prix Format

Double elimination is the same format that is used in many sporting events, such as baseball. Ladder bracket sheets are set up at the start of the tournament. As a team wins, they move up along the ladder. Once a team loses, they start on the other side and make their way up the 'loser ladder' If they lose a second game, they are out of the tournament. The last team standing is the winner.

Click Here to learn more about the Double Elimination Format

If you need more information on running an event you may email us by clicking here We will try to help where possible.

Hold Your Own Tourney 2, Grand Prix
The Grand Prix format was used at the World Series of Euchre

Hold Your Own Tourney 3, Double elimination
This format is also used in many sporting events

Hold Your Own Tourney 4, Progressive
Here teams play a total of 8 hands per round