Give Your Partner a Chance, page 7

Keeping your opponents guessing is always a good idea. The beauty of playing second-hand low is that it gives your opponents less information as to what cards you hold. Once a top card is played, it promotes the card under it. This information is especially important to someone that is naming trump with a weak hand.

In this example, the dealer is in the West position. The South seat determines the best move would be to pass as they have a chance at a euchre if the dealer picks the card. They also had a good bid in next. West passes as does North. The dealer picks the ace and discards the queen of diamonds. This leaves him two suited with three trump. 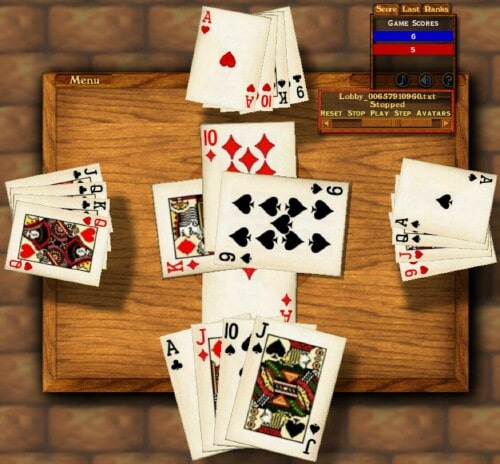 South leads the ace of diamonds. West follows suit with the king. North also follows with the 10. The maker(W) trumps with the 9 of spades.

Next the maker(W) leads back the queen of spades (trump). (we'll talk more about this lead later). South plays second-hand low using the 10 of spades. East takes the trick with the left and the north seat plays the king of spade. Five trump have been played. The bidding team now has two tricks in. One more trick needed for the point.

West plays the king of clubs, North follows suit with the 9. The maker(W) throws off the 9 of hearts and South takes the trick with the ace of clubs. He knows he has the top trump and there is only the ace of trump left, and that's in the dealer's hand. He also thinks his jack of diamonds could be boss as West played the king on the first diamond lead. He leads back the right and they collect two points for the euchre.

The interesting thing about this hand is that if they had read my article on playing the three trump two-suited hand, East/West may have been able to make a point. Let's say that after taking the first trick the maker lead back the 9 of hearts instead of the trump. South would most likely have thrown off the jack of diamonds and North would have taken the trick with the ace. About the only way they would have been euchred is if the third seat had led back the king of trump.


Give Your Partner a Chance, page 1
To win you may have to let a trick go by

Give Your Partner a Chance, page 2
One must learn to trust their partner

Give Your Partner a Chance, page 3
A little trust goes a long ways

Give Your Partner a Chance, page 4
Here are two examples in the same hand

Give Your Partner a Chance, page 6
The strategy of playing 2nd hand Low

Give Your Partner a Chance, page 7
2nd hand low keeps them guessing.

Give Your Partner a Chance, page 8
2nd hand low to euchre opponents