The Art of a Next call(aka Hoyle) page 3

Are you brave enough to call next with no trump?

As explained previously, the next call is a strategy where the person sitting in the seat just left of the dealer names trump in the second round of bidding and selects the suit of the same color as the suit that was just turned down. For example, if the dealer turned down a heart, a diamond call by the first seat is considered calling next. The reasoning behind the next call is that the opponents most likely don't have the bowers or have any strength in that color, or else they would have ordered up / picked up the turn card. If they do not have them and first seat doesn't have them, they must be either in the partner's hand or in the kitty.

On most next calls, first seat holds some trump in their hand. Yet there are times when trump are not needed. In these cases, they're calling next based solely on help from their partner's hand.

A classic next call holding no trump

In the hand below, even though the first seat has no cards in next (diamonds) this is a great call. First seat does hold three aces. All he needs to do is get two of them through. Then if his partner can get one trick, the hand is successful.

A strong hand in the off-suits gives you the best chance of making this work, but I've seen it work on very weak hands as well. Imagine the look on your opponents' faces when they realize you just bid when holding no trump and yet made your point! Inexperienced opponents may wonder what is going on, but those that know the game won't.

Here the dealer turned down the queen and I was sitting in the first seat. A bid in clubs looked tempting, but because a red card was turned-down, there was a good chance my opponents held most of the black cards. Many times a next call can be made with only one trump and an off-suit ace. In this hand I had all three off suit aces: the two black aces, plus the ace of hearts. A no trump next call was in order. In euchre, as in any other game of chance, one has to stick their neck out occasionally. Actually, with this hand, it was a fairly safe call to make, and as it was early in the game a euchre wouldn't really hurt us.

Try taking a few chances by bidding some of these hands, you may be pleasantly surprised. There is nothing worse than passing on a hand, and then you realize you could have made a point.

A second example of the next no trump call: 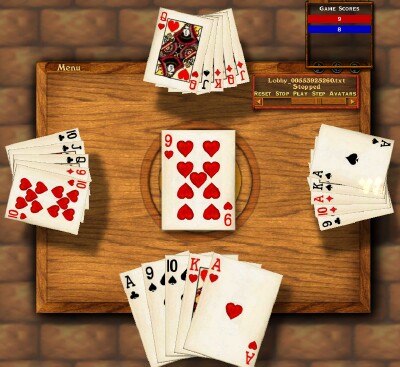 TThe next two examples are from games played against the same opponents. That evening we played a total of ten games. On this game the score was 9 - 8 them. The dealer is in the East seat and has turned down the 9 of hearts. Because we were playing against a strong team, I knew if I passed, second seat(W) was going to call black. Having nothing to lose (and two aces), I tried a no trump call in diamonds. As you can see, that played right into my partner's(N) hand.

Had I passed, second seat surely would have called clubs and won the game. Instead, we made our point. On the next hand, the cards were good to us again, and we went on to win the game.

Next with no trump Third example 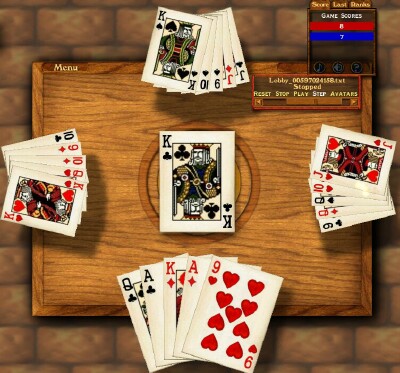 East seat dealt and turned-down the king of clubs. The score 8 to 7 them. It's always a pleasure to play against strong teams, as passing means the other team will most likely call. Not wanting to give them the opportunity, I(South) call next (spades).

All it took was a little luck, a little skill and this was turned into a two point hand. Our luck continued on the next hand with the last point needed to win the game. Overall, it was a great night at euchre. At the end of the night we each won five games. I'm looking forward to the next time we meet up.

Next with no trump Final example

Here is one last example. Different opponents this time but still using the same strategy. The dealer sits in the East seat and has turned down the nine of diamonds. Having two off-suit aces, I called hearts. I then made my two aces good. The rest was up to my partner.

Remember: If you hold two aces on a next call, you have to call it, trump or no trump.

Also note that a no trump call, as with any next call, works best against a strong team. I've seen many inexperienced players not order up their partner while holding both bowers, 'because they didn't have anything to go with it'. Against such a timid opponent, in this type of circumstance, a next call would likely result in a euchre.