The Art of a Next call(aka Hoyle) page 2

Don't ask why, Next Just Works

It is not always necessary to completely understand how something works. Sometimes it's sufficient just to know it does work. Next is one of those strategies. Many times a next call will result in a point for the calling team in unexpected ways. To take advantage of this, the only requirement is that you try. 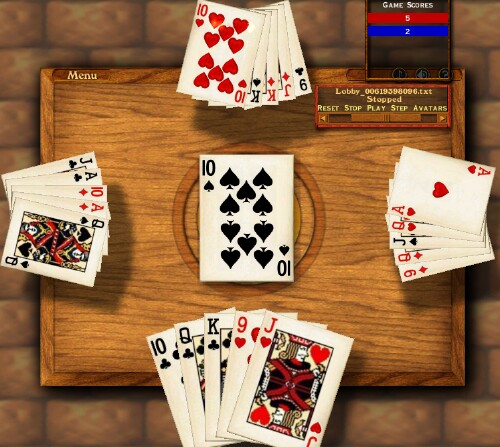 The dealer is in North and has turned-up the ten of spades. There is little chance they could make a point in spades so it is turned down. 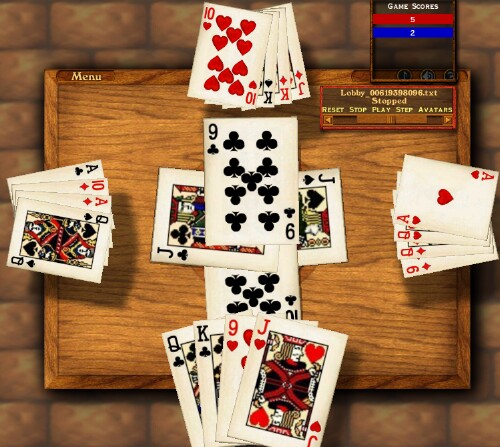 The player in the East seat calls next (clubs) and leads the left (jack of spades). South follows suit, West seat takes the trick using the right. The dealer(N) also follows suit. There are now four trump gone.

Now West leads back the ace of trump. In most cases, a double lead of trump would put the maker in a spot. In this case however, West seat realized that because their partner led the left, it must be the only trump they have. Leading the ace should pull the opponent's trump and increase the maker's chance of making any aces good. Six trump have been played.

The ace of diamonds is the next lead by West. North and East follow suit. South trumps in with the remaining trump. The only option South has is to lead a heart.

The maker(E) takes the last trick with his ace of hearts completing the next call.

Luck, you say. Well, maybe, but Luck can be influenced by skillful players. Let's look at some of the factors that contributed to that "luck". East (1st seat) made the call. Their partner(W) read the hand correctly and pulled trump by playing their ace.