Trying to Reel-in the big one

In almost any euchre hand the whereabouts of the boss cards is a concern. Some players would not even consider bidding without holding at least some of the top trump, but for those players that are willing to take a chance, the number of biddable hands is almost endless. Sure, there are advantages to holding the big fish in your hand, but in the end, all that counts is making a point. Three tricks are all that is required - any three tricks. You can lose the first two and still be good. In cases where you don't hold the top trump, you stand a better chance of making your point by removing them from play early. With careful planning you can lose a couple of tricks to your opponents and still take the three needed for a point. In fishing, the way to hook a large trophy is to use the right bait. In euchre, we have different baits available to us. The most common method is using a small trump lead.

When fishing, the way to hook a large trophy is to use the right bait.

Let's look at how we can use this tactic to win the game.

In the hand above, the dealer is in the South Position and they are ahead 7-5. Bidding gets passed around and the dealer turns down the 9 of clubs.

Now West has a decision to make. He holds three hearts plus the ace of clubs. Should he call hearts? Being that he would be ignoring Hoyle with a heart call [i.e., calling the opposite color rather than next], he could not expect much help from his partner. What would need to happen for his team to make a point? Could he be able to make the ace of clubs good? Maybe trump a spade and still have a trump left for the last trick? West also knows that with this type of hand there is the possibility of a lone call by the opposition, maybe in spades or diamonds. That would put them out. Although risky, a heart bid is worth taking. Pulling trump is the only chance of making a point, West makes the call and goes fishing for the top trump. 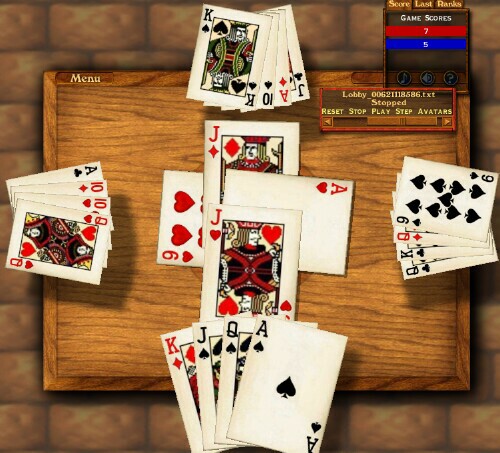 I have to admit this is as good as it gets. Very few hands work out this well. The three top trump fell on the first lead, the king was in the kitty. Winning at euchre involves taking risks and is even more important when playing against an aggressive team. Passing almost always means the other team gets the bid and at least one point. Calls like this are what makes the game interesting.

If your opponent's name trump and the maker leads a small trump, rest assured that he does not hold the right. If at all possible, play second-hand low. In a hand where you hold one of the bowers and the maker's partner does not play the other, there is a strong possibility that your partner has it. You don't want them to fall on the same trick.

Fishing for trump Part 2
Go fishing, but use an off-suit ace for bait.

Fishing for trump Part 3
Pay close attention to the cards