Going fishing? Any boss card could be used for bait..

On page 2 we talked about using an off-suit ace to draw out trump. These work well, but there are times when there are other cards that should be taken into consideration. After all, a trump is required to take any off-suit boss card.

The dealer is in the south position and turns-up the 9 of diamonds. Everyone passes and the dealer now gets his chance. As he already holds the left and the king, picking the 9 will give him three trump and a fair chance of making a point. 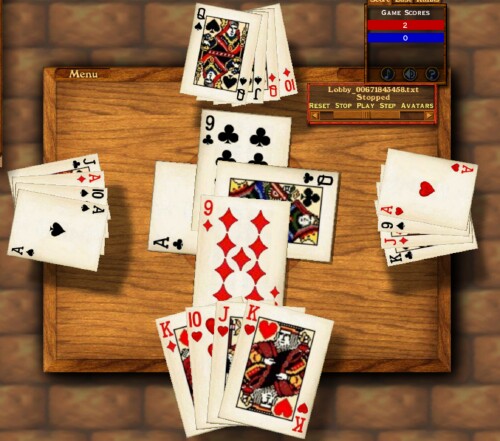 West seat starts the hand by leading the ace of clubs. North follows suit with the 9 as does east using the queen. The maker eagerly seizes the opportunity to make his 9 good. One trump played and the maker has his first trick.

Knowing this is a risky call, the maker tries to promote his king of hearts by leading the 10. West plays the ace of trump, north throws off and east must use the ace. Both teams now have a trick apiece with 2 trump having been played.

Now West leads back the ace of spades. Both North and East follow suit using the queen and 9 respectively. Once again, the maker(S) can make good use of a trump. The bidding team has their second trick with three trump gone

Because no one has played the right, the maker must assume it could still be in play. His only hope is, that by leading the boss king, he will be able to draw it out.
A little bit of luck, sure, but the fact that he saw this as a possible point-making hand was the biggest factor.

Most successful calls may require taking some risk, but will always require careful planning and paying close attention to the cards that are played.

Fishing for trump Part 2
Go fishing, but use an off-suit ace for bait.

Fishing for trump Part 3
Pay close attention to the cards