<
This page is Best Viewed in landscape mode (sideways)

Don't help your opponents by giving away information

'Fool the opposition, not you partner' In other articles I have talked about the many different ways of communicating with your partner. When your team makes trump the ability to pass information back and Fourth often results in additional points for your team, this is a good thing. However, that all changes when then the other team calls. Let's say, for example, you have been just ordered to pick up the queen of hearts and you already hold the ten of hearts in your hand. The 10 and the queen are connecting cards so using either one would not affect the strength of your hand. However, if you use the 10 of hearts prior to using the queen, you're telling your opponents you still have at least one more trump. Had you used your queen first, the assumption would be it was your only trump. Most experienced players will remember what card they ordered and watch for it to be played. This gives them an idea where the other the trump may be. Anytime you are the defending team you should try to play the pick-up first. This should be a standard play even when the cards are not connecting. Within this reasoning, apply common sense, one wouldn't throw an ace to hold a 9, but throwing a queen and holding the 9 shouldn't present a problem.

See the example below:

The dealer sits at the top of the screen in the North position. The East seat orders him to pick up the king of clubs. 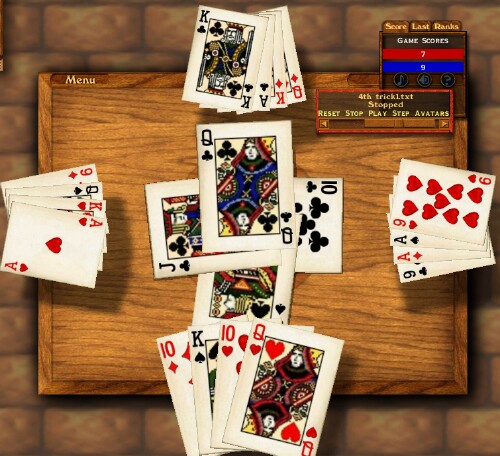 The maker(E) starts the hand by leading the 10 of trump. South plays the left and West overtakes it with the right. North holds on to the card they picked up and plays the queen of clubs. However, by playing the queen, they are telling the maker(E) they still hold at least one more trump. The maker(E) now has more information on how best to play his hand. Because the king and queen were connecting cards they should have played the king. That would have had no effect on the strength of their hand and would not have given away any information.

Other ways of NOT sharing information:

Another good method of fooling the opposition is when the maker leads the right and you hold the cards directly under it, i.e., the left-ace. Playing the left from this connecting set is a good way of hiding the fact that you hold the ace. This is because most inexperienced players tend to play the lowest card in their hand. Practice pulling the high card. This must be done with absolutely no hesitation. Even the slightest delay will tip off the better players to the fact that you're deciding between two cards. The idea is not to give any hint as to what remains in your hand.

Also, pay attention to any cards already played. If a 10 is played, then in your hand, a nine and jack are now connecting cards. When the suit played is next, the connecting cards would be the 10 and the queen.

While we are on the subject of not giving away information, we need to talk about playing second hand low. Briefly, if the maker leads a small trump he is fishing for the boss trump. If you were to hold the left and a small trump, play your small trump. Why? As I said, he's fishing, and hoping to find where the top trump are. He obviously doesn't hold the right. If by chance your partner does, you don't want them to both fall on the same trick. This may be your partner's only chance to make it good. On other pages we cover second hand low in more detail.

Euchre is a game of spilt-second decisions. A skilled player can guess the meaning of any hesitation. They also will keep track of what cards have been played. Try to keep them guessing. Don't give away any information you don't have too.


Legal Communication in euchre, page 1
How to Become a better partner

Legal Communication in euchre, page 2
Correct method of communicating with your partner

Legal Communication in euchre, page 4
Give your partner the correct information

Legal Communication in euchre, page 5
Don't help your opponents by giving away information

Legal Communication in euchre, page 6
Don't give away information - example1