When should I name trump, Part 5

While a green ace works, an ace in next may not.

In the part 4, I talked about naming trump when, as the dealer, you only hold one card from the suit that is turned up. The pick-up will give you two trump. As long as you also hold a green ace this hand is a potential point maker. Keep in mind that for the hand to be completed successfully, every opportunity must be given to your partner to take a trick.

However, that changes if the ace is in next. Why should that make a difference you ask? Part of the reason is the fact that the suit of 'next' loses a card to the trump suit. There are only five cards in next whereas the green suits have six. This significantly increases the chance of next being trumped.

Take a look at the following example:

The dealer is in the West position and turned up the queen of hearts. North has a nice bid in next if the dealer passes plus a possible euchre if they pick it up. They make the correct call by passing. East and South both pass. The dealer(W) picks up the queen and discards the 9 of spades.

The North seat starts off the hand by playing the ace of spades. East follows with the king, and South plays the queen. The dealer/maker(W) takes the trick with the queen of hearts. One trump is now gone and the team making trump have their first trick.

Next, the maker(W) leads the ace of diamonds. The north seat follows suit with the king. East throws off a 10 of clubs and South plays the 10 of diamonds. This is their second trick.

Now, the maker(W) is hoping his partner can take a trick and he leads the queen of clubs. North trumps in with the 9 of hearts. East plays the jack and South plays the ace of clubs. Two trump played. The opponents have one trick.

North, after taking the last trick with the 9 and knowing his queen of diamonds is a boss card leads the right. This pulls all remaining trump, which gives the opponents the last two tricks. It also gives them two points for the euchre.

Here is another example:

The dealer sits in the north position and turns up the king of diamonds. The bid is passed back and he picks it up. 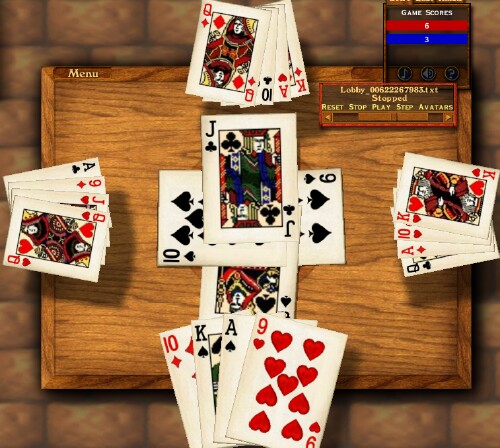 The East seat leads the 9 of spades and the South seat takes the trick with the queen of spades. West follows suit with the 10 and North throws off the jack of clubs. The bidding team takes the first trick.

Now the East seat leads back the queen of clubs. South throws away the 9 of hearts. West takes the trick with the ace of clubs. The maker(N) has to follow suit and plays the 10 of clubs. This gives the opponents their second trick. Being that West still holds the top trump. - It's euchre time.


When should you name trump, page 1
General facts about bidding, trump, score

When should you name trump page 5
While a green ace works, an ace in next may not.

When should you name trump page 6
Both bowers, not enough to call from 3rd seat

When To Play Alone, page 1
What is the minimum hand needed?