When To Play Alone, page 2

Do you try all possible lone calls?

On the prior page, we talked about the different situations where one may want to try a lone call. Because a lone call significantly increases the probability of winning, we will explore that further with some sample hands showing successful calls. As you look through these, think about what you would have called.

The dealer is in the Left position and turned up the 10 of clubs. Bidding is passed back to them, and they pick up the 10. Would you have done the same? Would you have called 'alone'?

This is a prime example of a hand in which your partner cannot help. Even if your partner held the right, they could only take a trick that you would have taken anyway. If your opponents had the right, it's a one point hand no matter how it's played.

The dealer sits in the North seat and turns up the jack of clubs. East passes. You are sitting in South: what do you do?

Similar to the previous hand, if the bidder's partner (dealer/North) holds the left or another trump, it cannot help the bidder's hand. Of course, if an opponent held the left, there is a chance that the dealer could capture it. Nevertheless, given the fact that, on any lone call, there are nine cards out of play, the likelihood that an opponent doesn't hold the left is increased. One has to consider the large advantage of making four points. This, in itself, makes a lone call worth taking the chance.

As you can see here, the call was successful

Here's an interesting hand. The dealer is sitting in South. West passes, and North orders the 9 into his partner's hand, calling a lone. What would you have done?

This lone call has a high probability of being successful as there is a 66% chance of taking the first trick. Even if the bidder has to use a trump on the first trick, the odds of him being euchred are slim. 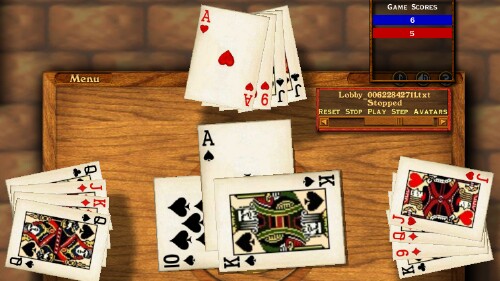 You have to be willing to try. In the hand below, the dealer is in the South position. They have an almost perfect lone hand in diamonds. However, as has happened to most of us at one time or another, the dealer turns up a spade. However, the dealer's partner in North has two spades. West seat passes. If you sat in the North seat, what would you do?

Well, in this case, North knows that lones can be made very on weak hands. They order up the ace of spades and go alone.

The hand played out as follows. They trumped the first lead with the king, and led back the right to (hopefully) take out the remaining trump. This worked, leaving their hearts as the boss suit: 4 points to the good.

Did you say they were just lucky? Sure, luck played a part in their successful lone, but the fact that they saw this hand as a possible lone, and were willing to take the risk, wasn't luck but rather astute play. Often there is little to lose and valuable points to be gained by 'risking' a lone call.


When To Play Alone, page 1
What is the minimum hand needed?

When To Play Alone, Page 2
Do you try all possible lone calls?

When To Play Alone, Page 3
Ace High Lones: Are you will to try one?

When To Play Alone, Page 4
Minimize the risk of being euchred

When To Play Alone, Page 5
Should you go alone on 8 points?