What should I lead from the third seat?

It is common knowledge that the third seat is one of the weakest positions to make a successful call. It typically requires having two or more sure tricks in the maker's hand. The thing that is seldom talked about is the partner's role in accomplishing the task. One of the essential requirements for a third seat call is the maker's ability to control trump. To do so, the maker is looking for a trump lead from their partner.

Many inexperienced players will lead an ace, or other off-suit while saving their trump for later in the hand. By ordering the dealer, one has to realize they are putting an extra trump in the dealer's hand. This allow them to discard and create a void. There is a high probability this void will be in the suit led.

A trump lead by the first seat gives the maker the best chance of making a point. Not leading trump tells the maker you have none.

Take a look at the following two examples:

The dealer is in the south seat. West and North seats both pass. East, sitting in the third seat, orders the dealer to pick the 9 of hearts. 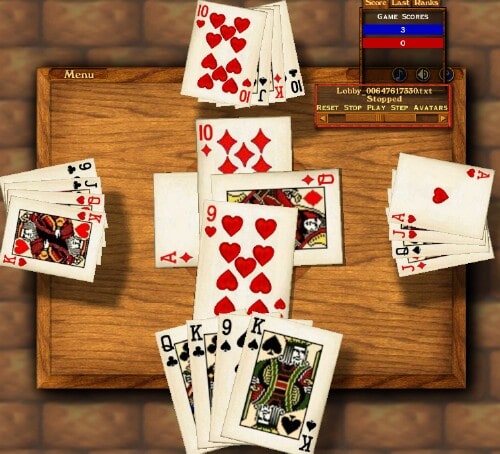 1st seat decides the best play would be to lead the ace of diamonds. This allowed the dealer to make good his only trump, the lowly 9.

In this hand, not leading trump only cost their team a point. They were lucky. All too often, the result is a euchre.


In this second example, they weren't so lucky:

We enter this hand during the second round of bidding. South has named diamonds as trump.

Because West dealt, North gets the first lead. They start the hand by leading the king of hearts. East seat plays the ace. The maker (S) trumps with the king and West over trumps with the left.

West leads the ace of spades and everyone follows suit. Because his partner in North did not lead a trump, the maker has to assume they are void. This could mean four possible trump held by the opposition. Still, by holding the right - ace, he is not too worried.

West leads back the ace of cubs and it is game over for the maker.

When a player names trump from the third seat, you have to assume they know what they are doing. They have a plan. Most times this includes a way to control trump. It is up to the partner to assist, not try to create their own 'better' plan.


What Card should I Lead? page 1
Help me understand what card to lead

What Card should I Lead? page 2
The proper use of a double lead

What card should I Lead - 4th trick? Pg 1
Why is the fourth lead so important?

NEVER lead trump on defense, page 1
Until you learn when is the correct time