What were they thinking?

OK, here I have to poke a little fun at some of the incorrect ways, and foolish mistakes players make. We have all been paired up with a partner that puts little thought into what cards they are playing. As we watch the game unfold, we just have to wonder 'what were they thinking?'

For those that are new to euchre, I apologize, this is not about you. Euchre may be an easy game to learn, but it takes time and effort to know how to play it correctly. All of the examples presented here are from games where the players have hundreds and sometimes thousands of games under their belt.

The comment below was left by Yankee Doodle back in 2013, It remains at the top of the "what were they thinking" list.

One of my very favorite plays [sigh] is when the opponent goes alone and my partner leads trump "to make one of my aces good."

In the example below, I'm sitting in the South position, I've dealt and turned up the ace of diamonds.

My partner orders the ace into my hand. West starts the hand off by leading the 9 of trump. My partner, holding both bowers plays the left. 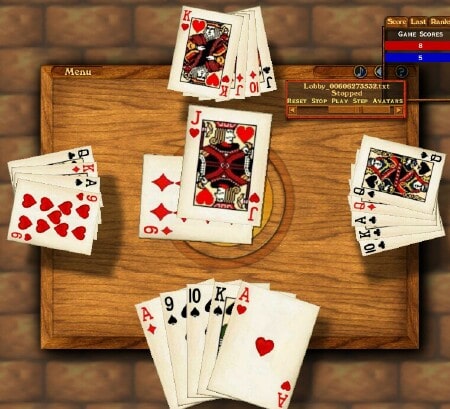 I guess they forgot they had ordered the ace. (And that they were playing partners)

Again, as the dealer, I'm in the south position and turned down the 10 of spades. West also passes and my partner(N) names clubs as trump.

As we join the hand the Score is 9 to 8 our favor. We have taken the first 2 tricks and West seat has just taking their team's first. West must have sensed my partners bid was weak and led the ace of clubs. It apparently never occurred to my partner that by playing the left, the King would become boss, even if East held the right. Needless to say we lost the game....

As in the previous examples I'm in south, the dealer and turned down the 9 of spades. East seat names diamonds as trump. West started off by leading the ace of spades. It seemed that they forgot to help their partner by showing them where the left was and that spades was turned down suit. This lead allowed me to trump in with my only trump, the ace.

If West had led the left before playing their ace, four trump would have fallen; it would have been a safe assumption that their partner held the remaining trump. The maker would have no reason to play the right. Next West could have played the ace of spades without it being trumped. Then, because the king of spades fell on this lead, this would have made his queen of spades boss. Playing the queen of spades could have given the maker a chance to rid his hand of an unwanted heart.

The above play quickly turned a potential 2 point hand into a 1 pointer.

Misplayed euchre hands, page 1
What were they thinking?

Misplayed euchre hands, page 4
How to lose without really trying

Misplayed euchre hands, page 5
That jack is a possible trump!