Let us continue looking at some other questionable plays. They all seem to illustrate a basic misunderstanding of euchre.

The dealer sits in the South position, turning up the ace of hearts. West passes and North orders the ace into the dealer's hand who then discards the queen of clubs. West seat starts by leading the ace of clubs. North follows suit, playing the Ten of clubs. East also follows suit, playing the Jack. South, thinking this may be a two-point hand, trumps in with the 10 of hearts. Next South shows his partner(N) where the right is. West throws off the Jack of spades. North plays the Nine, and East throws on the queen of spades. The maker(N) goes low with the 9. Only South and the maker(N) show trump with 3 having been played. Now South thinks, time to try and get North back in the lead by playing the 9 of spades. North trumps in with the king of hearts. Now 4 trump are gone.

What does North do next? Why they lead the left, of course. South wonders, do they hold the last trump? Maybe they still held an Ace? No, their last card is the 9 of diamonds, a suit yet to be played.
East seat still holds the diamond ace and turns a 2-point hand into a 1-pointer.

The dealer is in the south seat has and just dealt. West ordered him to pick up the nine of diamonds. West was thrilled that they made 2 points on the hand. But one does have to wonder why they didn't wait and go alone in next.

Speaking of lones, I often talk about the correct lead when defending against such a call.

South seat is the dealer, has just dealt, turned up then picked the 10 of spades. South thought they had a fair shot of making a lone so why not try. East seat leads the Jack of hearts. By doing so they put themselves in a spot on 4th trick of having to choose between the two aces. With a 50/50 chance, they picked wrong.

Could it be someone told them not to lead an ace into a lone, but forgot to give them the rest of the story? Hard to say, but it did earn them a spot on this page.

Again, talking about what is the correct lead when defending against a lone call. There are good and bad leads. However, here is something I'd never expected to see.
The south seat picks up the ace of hearts and calls alone.
With 3 trump West had the lone stopped if they didn't lead the left. Do you think they were trying to get on this Page also? 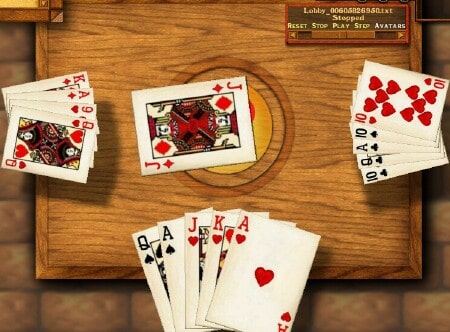 Misplayed euchre hands, page 1
What were they thinking?

Misplayed euchre hands, page 4
How to lose without really trying

Misplayed euchre hands, page 5
That jack is a possible trump!