One hand is where a trump lead can be very effective is when you're sitting in the first seat. The dealers had just picked up the card and you hold two of the same suit along with two green aces. A trump lead is the best way to increase the chance of making those aces work for your team.

Below is on such example: 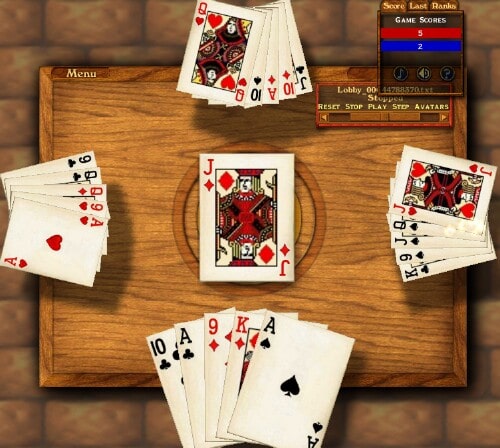 The dealer sits in the East position and turns up the jack of diamonds. Bidding is passed back around and the dealer picks up the jack. Even though he doesn't hold an ace this is still a very biddable hand. He has two sure tricks; he just needs his partner to take one.

Meanwhile, South looks at his hand and thinks about the possibility of a euchre. He holds both green aces and making make both good would help achieve that goal. One way to make this happen is to take out a round of trump. He starts by leading the trump king, as it is the higher of the two, leading the 9 may allow the maker to take the trick using only a small trump.

West plays the queen and north seat correctly plays second-hand low, saving his ace. The maker(E) takes the trick with the left. By doing this, he is letting his partner know he still has the right. (Yes, this also lets everyone else know he most likely called with only the two bowers.) The bidding team now has their first trick with four trump played.

Now the dealer/maker(E), after taking the last trick, leads the king of clubs. His team has one trick and because he still holds the right, is assured of a second trick. South takes the trick with the ace of clubs. Both teams have now taken a trick.

Next South leads the ace of spades. He's looking for a second trick. West plays the 9 of hearts. North follows suit with the 10 of spades and the maker(E) also has to follow suit and plays the jack. Because the ace walked, it gives N/S two tricks.

Remembering that clubs have been led once, South seat leads the 10. With three trump still unplayed the second lead of clubs is likely to be trumped. Maybe by his partner? West plays the queen and North seat trumps in with the ace. Now the maker(E) has no choice but to overtrump with the right. This leaves the first seat with the remaining trump and two points for the euchre.


NEVER lead trump on defense, page 1
Until you learn when is the correct time

NEVER lead trump on defense, page 5
Unless you hold 1 trump, 2 off suit aces

NEVER lead trump on defense, page 6
A combination of three techniques are used

What Card should I Lead? page 1
Help me understand what card to lead