Endplay, How and Why Page 3

To increase your chances of success

By using an endplay strategy, you have the best chance of making your point. Due to the randomness of card distribution, there will always be a hand that should have worked but didn't. Conversely there will hands that little chance of success yet ends up making a point. You're never really sure of the outcome until you try.

The consequences of not using an endplay and being euchred could mean two points for your opponents.

Look at the following example:

In this hand, the dealer sits in the North position and turns up the queen of clubs. First seat(E) looks at his hand then passes. South, seeing predominately red cards, also passes. West does the same. The dealer takes the queen and discards the king of spades. This gives him a two suited hand and a reasonable chance of making a point.

East seat, having the first lead, starts thing off with the ace of clubs. South can be of no help and plays the 9 of spades. West follows suit with the 10 and the dealer/maker takes his first trick using the 9. One trump is gone. 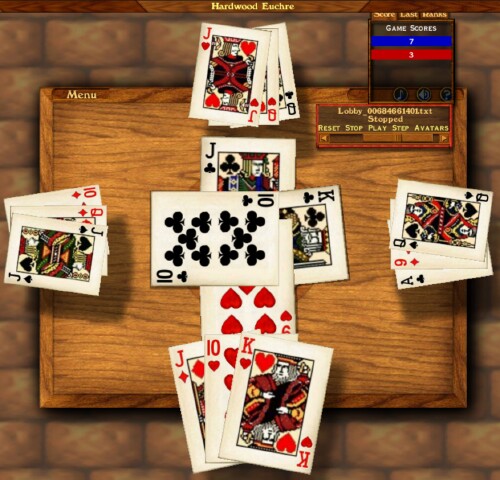 Next, the maker takes his second trick using the right. Both opponents follow the trump lead, but his partner shows void. That is never a good sign. It is worthwhile to note here that the right would have been good for a trick at any point in the hand.

The maker has two tricks, just one more needed for the point. Unfortunately, his options are limited. He leads the queen of hearts and hopes for the best. East correctly ducks, playing the 9 of diamonds. South follows suit with the 10. West takes the trick using the left. 5 trump have been played.

Now West leads back the 10 of diamonds. The maker trumps in with the queen. But wait, East over-trumps with the ace. This gives them a third trick and two points for the euchre.

Let us go back and see what would have happened in the maker had saved the right and played a heart instead. Of course, it is hard to say whether first would have trumped or ducked but that lead would have given the maker a much better chance.


The Endplay, Euchre Lesson 9
Here we cover the basics

Endplay, How and Why, Page 1
A means to an end

Endplay, How and Why, Page 2
The object is to make a point

Endplay, How and Why, Page 3
Increase your chance of success

Endplay, How and Why, Page 4
A final exam